I’ve been a busy boy lately researching a range of cultural industries topics, including the Australian screen industry and a theory of cultural innovation. So over the next week or so I’m going to be posting about some of my discoveries in these fields, in case any of you feel like checking out some of the fascinating research currently emerging in these areas.

Today, I’m going to be looking at Hyejin Yoon and Edward J. Malecki’s article “Cartoon planet: worlds of production and global production networks in the animation industry.” This article is brand new, published in the first 2010 issue of Industrial and Corporate Change [19(1):239-271], and looks at globalisation in the international animation industry:

As more animated films are produced, new “worlds of production” have emerged. The animation production system is distinct from film production, relying on different technologies and labor skills. Its globalization, therefore, has taken place differently, although both are structured by the global production networks of the media conglomerates. We present a framework for understanding the animation industry, its international division of labor, and its diverse markets, enabled by pools of artistic labor, growing demand, and the diffusion of production skills.

There’s a wealth of information in this long and detailed piece, but one graph in particular really took my fancy: 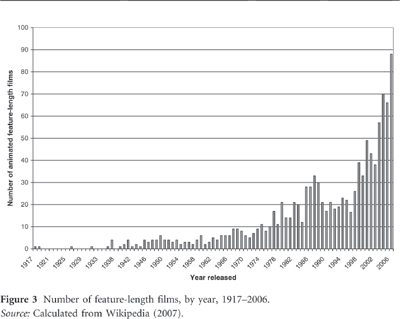