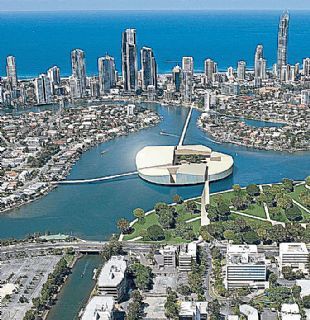 This year, the Gold Coast City Council held a “Master Plan Ideas Competition” to decide what to do with a 16 hectare site in the middle of the growing city. The site is planned to house a new Gold Coast Cultural and Civic Precinct, eventually containing the Council chambers and a swanky new art gallery. The competition aimed to “generate creative new visions”, “stimulate community discussion” and “identify specific design features” for the site.

As the Gold Coast  competition website says, “the 16.5 hectare site is located at 135 Bundall Road and is bordered on three sides by rivers and canals. Formerly a simple rural cane farm, the site is now at the heart of a growing city with views across the skyline of Surfers Paradise, Main Beach and Broadbeach.”

Last week, the Gold Coast Council announced the winner of the competition and its $90,000 prize: Sydney firm Super Colossal, who proposed an entirely new island in the Nerang river for the precinct’s various civic and cultural buildings.

Competition judges praised the winning entry for its creation of open space, its many pedestrian bridges and its defensibility in the face of rising sea-levels. One judge even compared it to “the ancient islands in the Laguna Veneta such as the Isola Murano and Isola San Michele.”

“We think the Gold Coast is one of Australia’’s most interesting cities,” Super Colossal’s Marcus Trimble told me in an email. “Nowhere else do you have close proximity of the ocean, high rise towers, waterfront suburbia, natural and man-made lagoons and industrial buildings.” END_OF_DOCUMENT_TOKEN_TO_BE_REPLACED