There’s a great review essay in The Times by Stefan Collini on the role of literary magazines in the rise of modernism as an intellectual movement. I think it’s an interesting topic; indeed, small press and independent publishing has always interested  me and I have been writing recently for one of Australia’s premier little magazines, Meanjin Quarterly. 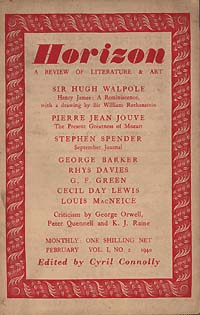 Cyril Connolly's Horizon is one of the best-known British literary magazines of the 1940s. It published writing by a who's-who of literary figures, including Auden, Eliot, Orwell, Russell, Bowles, Koestler and Greene.

“The first function of a literary magazine is to introduce the work of new or little-known writers of talent.” There is an appealing modesty about this brisk declaration, even a kind of impersonality in subordinating editorial ego to the larger good; it seems likely to provoke a murmur of agreement, not least from new or little-known writers. But this is not, of course, the only way in which the function of such publications may be conceived. The editor of one of the many new literary periodicals established in the 1920s announced a no less definite sense of purpose in quite other terms: “I shall make its aim the maintenance of critical standards and the concentration of intelligent critical opinion”. The goals expressed in these two quotations are not necessarily in conflict: editors might, it is true, maintain “critical standards” in a practical way by identifying new literary talent. But the tendency is for the pursuit of these two purposes to result in periodicals of rather different types. One, often thought of as the classic “little magazine”, largely carries new poetry and fiction, mostly by as yet unrecognized writers, often exemplifying a style of writing that is self-consciously, even determinedly, insurgent and unfashionable. The other, committed to upholding the critical or reviewing function, is largely filled with essays and book reviews, taking in the literature of both the past and the present, as well as taking in more than literature; it aspires to shape intelligent opinion and to combat the slackness and puffery of mainstream literary journalism.

There’s much to unpick here, but I will merely add that literary magazines create a much-needed form of cultural capital. By unearthing and promoting younger and emerging writers, for instance, they act as a seed-bed for new talent across the whole literary sphere.